Between the plain and the garigue, Provence and Languedoc, Nîmes, 2nd largest city in Languedoc Roussillon, has a unique roman heritage in France. This one is particularly known for its bullfights and its many festivals and it is also the birthplace of Daudet, a french writer. In modern times, it will become a protestant safety place. Discover the city at the time of the roman festival at the beginning of may or at the time of its famous feria in june or september.

Nîmes, an ancient city of rich romans has preserved its ancient monuments, Proof, that the city was very flourishing 2000 years ago, the people of Nîmes built an aqueduct to transport the water to the city’s former thermal baths. We will start our visit with the gardens of the Fountain, an ancient roman necropolis built around the Nemausus spring and then continue with the visit of the Diana Temple. Passage in front of the former great roman temple: the Maison Carré, thus named in the 16th century in reference to its geometric shape with four right angles. Visit of the arenas, a former roman amphitheatre, known for its gladiator and bull spectacles. More than 20,000 spectators attended the show in the arenas, which are now among the best preserved in the world. Depending on their social status, visitors were spread out in the former roman amphitheatre but thanks to the stepped construction, the arena was perfectly visible from each square.

Visit of the romanesque cathedral of St Castor. The foundations of this 11th century romanesque church are here enriched by 17th century neo-gothic elements and also marked by the renovation of the church in the 19th century.

However, Nîmes is not only known for its ancient monuments but also for the origin of the manufacture of an essential product: jeans, or denim. A centre of trade and textile production in the 17th century, denim, a robust and resistant fabric, was there produced in Nîmes before being exported to California by the german textile merchant Levi Strauss.

Finally, do not forget to touch the nose of the symbolic animal of Nîmes which is located at the crocodile fountain and which will bring you happiness according to what legend tells us. Free time in the city. Taste a sweet speciality, the Croquants de Nîmes. 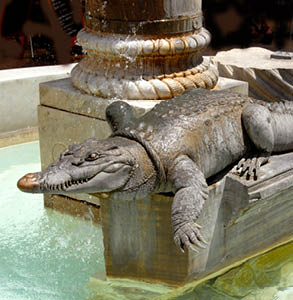 The crocodile, the simbol of the city 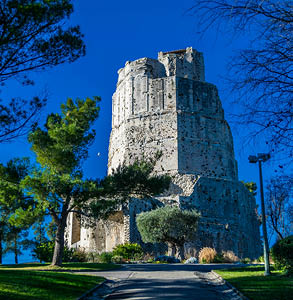 Magne's tower, the biggest romain tower of the city 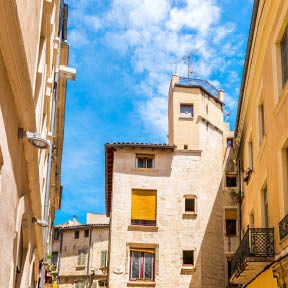