Discover the hinterland, Pezenas, La petite Versailles du Languedoc, the volcanic beach of Cap d‘Agde and Béziers and its famous 9 locks of the Canal du Midi

Pézenas, nicknamed the little Versailles of Languedoc, does not have this title for nothing. Indeed, for many years it was the capital of Languedoc and a place for several french kings, queens and aristocrats who had many private mansions built there such as the Hôtel des Barons de Lacoste. We can admire one of the most beautiful stairs which seem to fly built by Étienne de Montagut, Lord of Lacoste. A city that inspired Molière, a famous 17th century french theatre writer, for more than 10 years. The most famous legend tells that Molière liked to sit in a wooden armchair at the place du marché au Bled. Follow in the footsteps of this theatre star and immerse yourself in the charming atmosphere of this city that already inspired Molière at the time.

After a city tour, we will take a lunch break at the famous black sand beach of Cap d‘Agde where its volcano exploded several hundred thousand years ago, creating black sand beaches unique in France. The panorama over the sea, the black cliffs, the Cap d‘Agde and the Fort Brescou, nicknamed the Alcatraz of Languedoc, is simply splendid, the transparent sea is protected reserve, you can meet all types of mediterranean fish.

We will discover the famous 9 locks of Fonserannes of the Canal du Midi, the oldest canal in Europe, built 350 years ago by Pierre-Paul Riquet. 250 km long, it is of course part of UNESCO‘s heritage, it has allowed for several centuries to cross France from the atlantic ocean to the mediterranean sea. Finally, the day will end with a visit to Béziers, the wine capital of the region and its magnificent gothic cathedral St Nazaire, with its magnificent panoramic view of the biterroise region. 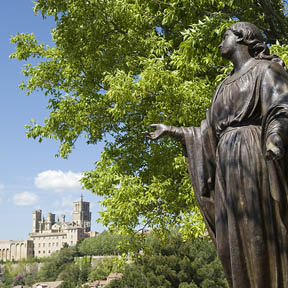 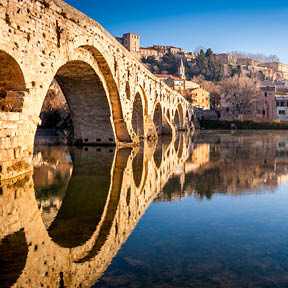 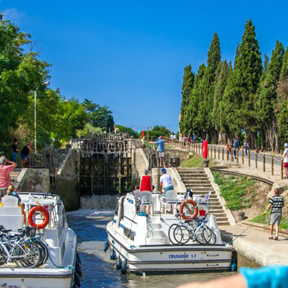 The 9 locks of the Canal du Midi